Over the last 20 years, Russell Coleman has taken on violent crime at the highest levels of law enforcement. He is a pro-life, pro-family conservative Republican who has the hard-won experience to keep Kentucky families safe as the next Attorney General.

In 2017, President Trump picked Russell to be the U.S. Attorney for the Western District of Kentucky, and the U.S. Senate unanimously confirmed him. As the chief law enforcement officer for 53 counties, Russell aggressively took on violent crime from small towns to big cities and cracked down on dangerous drug traffickers. He was called “the best prosecutor in America” and formed strong partnerships with law enforcement agencies to help take criminals off the streets. To better serve rural Kentucky counties, Russell opened the first-ever full-time U.S. Attorney’s Office in Bowling Green and increased the staffing at the U.S. Attorney’s Office in Paducah to its highest level ever. In 2020, he was named to a Working Group of President Trump’s National Commission on Law Enforcement & the Administration of Justice.

Read in The Courier Journal 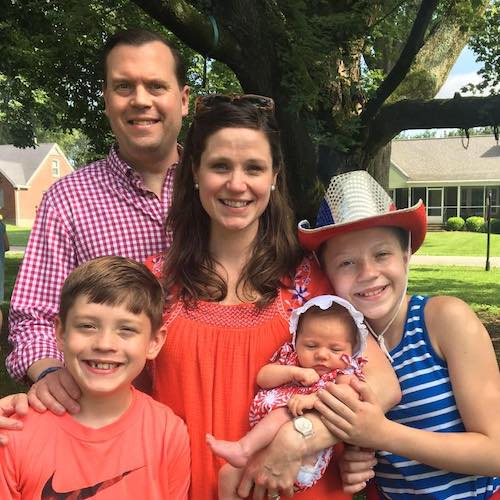 Since he was a boy, Russell always dreamed of joining the FBI. Through hard work and single-minded focus, he achieved his goal. He investigated national security, white collar, and violent crimes and even volunteered for a temporary assignment in Iraq to capture and kill terrorists alongside our troops.

In 2008, his dream was taken away. Russell felt a persistent pain in his leg one night. In a matter of days, he was paralyzed from the waist down. A rare disorder didn’t just threaten Russell’s FBI career, it made him unclear if he would ever walk again. Through prayer, determination, and the talents of specialists at the Frazier Rehab Institute in Louisville, Russell regained his ability to walk and drive a vehicle.

Born in Paducah, Russell Coleman was raised in Mayfield and then rural Daviess (Thruston) and Logan (Bucksville) Counties. He earned his undergraduate and law degrees from the University of Kentucky. Russell lives in Oldham County with his wife, Ashley, and their three young children. The Colemans are Members of Southeast Christian Church.

Russell is a Member of the Federalist Society, National Association of Former U.S. Attorneys, and Society of Former Special Agents of the FBI. He is a Lifetime Member of the NRA.

PAID FOR BY RUSSELL COLEMAN FOR ATTORNEY GENERAL